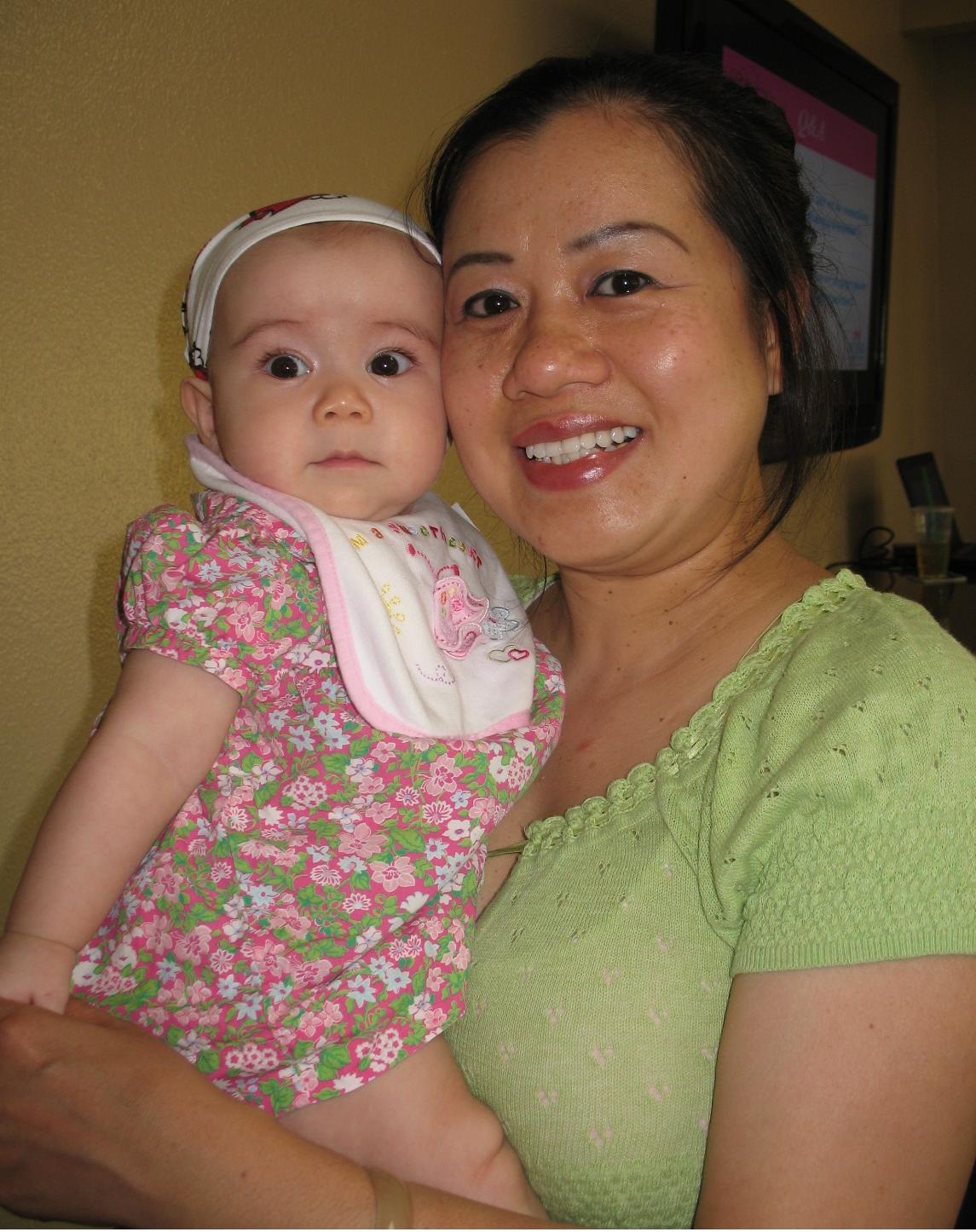 Mai-Phuong Nguyen is a first-time mother and like many first-time parents, had many questions and concerns about her pregnancy and how to care for her child.

What should I eat while pregnant?  What should I feed my baby?  What do I do if my baby becomes ill?  Will I be a good mother?

Sitting in her lap today is Angela, who at 7 months, blinks curiously up at every passing visitor with a cherub-like face that could melt even the coldest of hearts.  Mai-Phuong leans forward, cooing and hugging her daughter warmly, sprinkling butterfly kisses across her cheek.    Like many first-time mothers, Mai-Phuong is hopelessly in love with her baby.  Yet, unlike many mothers, a year earlier Mai-Phuong Nguyen was a widow and pregnant with her first child at the age of 42 years.  With her maternal age deeming her a high-risk pregnancy, she felt completely overwhelmed and alone until she encountered MOMS Orange County.  Out of habit, she closes her eyes and takes a deep breath.

Soon after, Becky, a Vietnamese Maternal Child Health Coordinator contacted Mai-Phuong.  During monthly home visits, Becky listened to Mai-Phuong, offered her Vietnamese-language education materials, linked her to community resources and offered advice on how to take care of her health while pregnant. Mai-Phuong also spoke to Becky about breastfeeding, her feelings about becoming a mother and the Vietnamese cultural anecdotes that are often passed down to new mothers.   With her immediate family still in Vietnam, Mai-Phuong was so relieved and happy to know there was someone who cared enough to listen and who she could trust.   Becky also referred Mai-Phuong to prenatal classes where she learned more about exclusive breastfeeding and how to care for her newborn.  Hungry for information, Mai-Phuong soaked up everything she learned like a sponge.

Despite Mai-Phuong’s best efforts, she gave birth early at 8 months and delivered a premature baby which was admitted directly to the Neonatal Intensive Care Unit (NICU) where it spent its first week of life.  Mai-Phuong was plagued by anxiety about her newborn daughter’s well-being and her inability to breastfeed.  Like many other mothers with babies in the NICU, she was not able to breastfeed due to her infant’s distance from her in the hospital. Furthermore, the language barriers made it difficult for her to ask questions and seek advice from nurses and hospital staff.  At home with her baby and alone, she struggled to breastfeed and was exhausted from the anxiety of not being able to feed her baby

When Becky came to see her, Mai-Phuong was at her wit’s end and was desperate for breastfeeding support.  During her post-partum visit, Becky advised Mai-Phuong and gave her the advice and encouragement she needed to endure and responded to her many questions and concerns.  Becky also referred Mai-Phuong to WIC services where she received additional support.  With every visit, Becky infused hope and confidence through patient ears and a knowledgeable heart.  Slowly, Mai-Phuong’s anxiety was alleviated and she was able to overcome the hurdles and feed her baby.

As soon as she was able to breastfeed, Mai-Phuong instantly felt the massive weight lift from her shoulders and the stresses begin to dissipate.  The anxiety of feeling incapable of doing the most basic of duties as a first-time mother—feeding your baby—was finally gone.  As a mother, all she hoped for was her baby’s health and well-being.  It is that hope that pulled Mai-Phuong out of her loneliness to reach out for help.  Despite her limited resources, Mai-Phuong’s strong will and inquisitiveness brought her to MOMS Orange County where she was able to receive encouragement, knowledge and support.

Today, Mai-Phuong shares openly about her experiences with others and speaks about how she conquered her loneliness and depression, fighting for the health and well-being of her baby.  Her vibrant spirit is evident and the love she has for Angela is undeniable.  Mai-Phuong smiles and holds Angela close and says, “Thank you to MOMS Orange County for being there to support and motivate me and remind me that despite my circumstances, I can be a good mother…and I am.”

facebooktwitterlinkedinreddittumblrpinterestEmail
MOMS Orange County joins the voices of all who are deeply troubled by racism, inequality and injustice in all its forms.
As an organization, we were founded to increase access to quality prenatal care for women who, because of skin color or low-income, face worse maternal and birth outcomes than the general population. For nearly 28 years, we have partnered with mothers, fathers and their babies during the earliest years, removing barriers to equitable health care access, and along the way surrounding them with love and dignity, believing in the inherent worth of each member of our colorful, incredible human race. We stand together with all of those voices which are now being heard to enact change and move towards equality for all. We pledge to continue to serve each member of our community with the mission goal of helping families have healthy babies.